Alone in The Dark Collection 5 ชุด

Alone in The Dark Collection for Windows

Complete CD/DVD images of each game are given for Download Jeremy Hartwood has committed suicide in his Louisiana mansion, Derceto. You take the role of either Edward Carnby, a private investigator, or Emily Hartwood, Jeremy's niece, and investigate the suspicious death. The three-floor mansion is reputed to be haunted by its eccentric past owner. Very quickly, you realise that it is. Warped rats, zombies and giant worms are among the foes who are after you, and you must somehow escape.

Alone in the Dark is an action-adventure survival horror game. The action is displayed from a number of fixed viewpoints. The backgrounds are 2D painted images, while the player character, all items and monsters are rendered as 3D models.

To escape the mansion, you'll have to solve a number of puzzles. They usually involve finding an item and using it in a proper place. Apart from items necessary for the puzzles, you can also find books and documents that can be read, healing items which can be consumed to restore hit points, and weapons.

Weapons come in handy, since Derceto is full of various monsters. Some monsters can be killed with weapons, but others are either impossible to kill or require a bit of thinking to take down. Note also that you have limited amounts of ammunition, so you have to use firearms carefully. In Alone in the Dark 2, you take the role of detective Edward Carnby, one of the two main characters in the original Alone in the Dark. Carnby is now called upon to investigate a bootlegger named One Eyed Jack after an old detective college name Stryker attributes Jack to the kidnapping of young Grace Saunders. Stryker attempts to infiltrate Jack's dilapidated mansion of Hell's Kitchen and rescue the girl, only to disappear himself. That's where Carnby comes in.

Carnby soon learns that Jack and his gangsters are really 15th century pirates who gained immortality after Jack joined forces with Elizabeth Jarret, a Voodoo witch. However the dark magic which keeps them immortal also requires Jack and his crew to regularly make human sacrifices (which explains Grace's kidnapping).

Now Carnby must battle his way through Hell's Kitchen and Jack's army of tommy-gun wielding gangsters, searching for a way to break the spell and make them stay dead.

Alone in the Dark 2 is an action-adventure game, similar to the original Alone in the Dark. Like its predecessor, the game uses hybrid 2D-3D graphics. Completing the game requires you to solve a lot of puzzles while fighting zombie pirates along the way. Some enemies can be killed with the numerous weapons at your disposal, while others need to be defeated via trickery.

Apart from Edward Carnby, the game also includes a short section (two sections in the CD-ROM version) where you play as the little Grace Saunders. Grace obviously cannot fight, and thus the sections featuring her are all about fast reflexes and wits to evade and outsmart the enemies. After surviving through two encounters with the supernatural in Derceto and Hell's Kitchen, detective Edward Carnby is ready for another round of being Alone in the Dark.
In the third and final game in the series, we learn that Emily Hartwood (the other main character from the original game) started a career in Hollywood movies after surviving her ordeal in Derceto. Her latest project is a spagetti western being filmed in an abandoned western ghost town called Slaughter Gultch, which rests precariously on the edge of the San Andreas fault. Originally a gold town set up rather rudely on ancient Indian sacred ground, Slaughter Gultch was founded by a man named Jebediah Stone and run by his own private army of cold-blooded killers. Stone and his men were killed by angry villagers led by the local Blacksmith, and the town was abandoned soon after. Unfortunately, Emily's crew disturbs the spirits of Stone and his men, who promptly return to the world of the living and proceed to kill off the film crew one by one.

Carnby is called to Slaughter Gultch after learning of the disappearance of Emily and her crew, and is soon met by Stone's Zombie Cowboy gang. Armed with various western paraphenalia such as colt peacemakers, bullwhips, and even a gattling gun, Carnby must fight his way through Stone's minions and discover Emily's fate. Along the way he learns some surprising things about Stone's origin, as well as a sinister plan interrupted by his death which involved the destruction of the west coast and which Stone can now pursue once again.

Set on October 31, 2001. Edward Carnby's best friend and partner, Charles Fiske, has been found dead off the coast of Shadow Island, a mysterious island near the coast of Massachusetts. Carnby's investigation quickly leads him to Frederick Johnson, who informs him of Fiske's search for three ancient tablets with the ability to unlock an incredible and dangerous power. Johnson pleads with Carnby to take the place of Fiske and reopen the investigation in order to recover the tablets. Carnby accepts and makes it his mission to find Fiske's killer. Johnson introduces Carnby to Aline Cedrac, an intelligent, young university professor. She joins Carnby to recover the missing tablets and assist Professor Obed Morton, who she believes to be her father. While flying over the coast of Shadow Island, Carnby and Aline's plane comes under attack by an unknown creature. Carnby and Aline both jump out of the plane and parachute to the ground, but are separated immediately. Carnby lands in the dense forest just outside a manor, while Aline lands on the roof of said manor.

The player is given the option of choosing which of the two protagonists they play as. Carnby's side of the plot is based mainly on fighting the monsters by physical means, particularly with his trusty double barreled revolver; while Aline's is more centered on puzzles. The two occasionally meet up, and the main areas of plot intersect.

The player soon comes under attack from Creatures of Darkness that appear out of nowhere and seem to be living shadows. These Creatures of Darkness are eventually revealed to be reptilian, silicon-based life forms from the center of the Earth, an enormous world of dark caverns known as the World of Darkness. Shadow Island apparently contains one of the many portals to this underground world. True to their name, the game's enemies are averse to light (which apparently turns them into ash), and this figures heavily in gameplay. Players can use their flashlight to repel certain creatures, and killing them is accomplished with such light-producing ammunition as "magnesium bullets" and "phosphorus shells."

Light plays a significant role in this game. One of the game's main features is the flashlight that can be used to light up the game's darkened scenes, revealing hidden details and uncovering items. To this end, the developers crafted an unusual graphics engine which allowed the 3D player character's flashlight to properly illuminate and cast shadows on the 2D, pre-rendered backdrops. This was accomplished by rendering the backdrops at various levels of illumination and including information on the distribution of objects in the scene. The graphics engine could then properly use brighter versions of the backdrop where the flashlight was expected to be casting light, and leave shadowed areas dark. 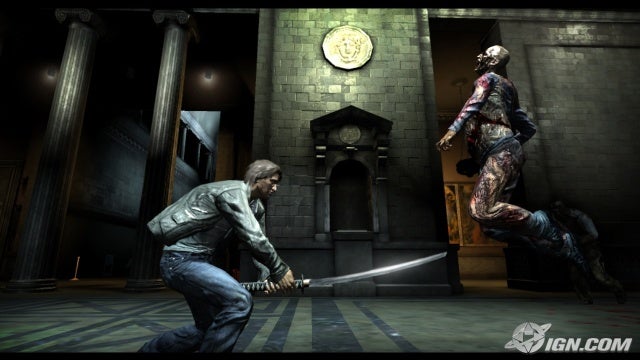 The game begins with Edward, a paranormal investigator and the main character, being taken to the roof of the building he is in to be killed. The guard is killed by an unseen force, allowing Edward to escape. He has amnesia and doesn't remember anything. As he wanders the building looking for a way out, he witnesses several people being killed or possessed by "demonic" forces. During his search for an exit, he meets Sarah Flores, an art dealer (city planner in the Wii version). Together, they make their way to the parking garage, where they find Theophile Paddington, an old man who claims to know what’s going on. He says that the chaos in the building was caused by a stone that, until recently, was held by Edward. It had been taken from Edward by a man named Crowley, who released its power. Theophile has the stone now, and finally states that in order to end the chaos, Edward must follow the "Path of Light", before it is too late...